Spring is underway and things are busy as usual for the studio. I've been directing most of my efforts towards building our offerings over on Redbubble. I've added a link to the main page. The latest set of designs in addition to the Monster Hunter ones are from a set of blade-like ships called the Riser Squadron. The following group design as well as the individual ships are all on the Redbubble store. 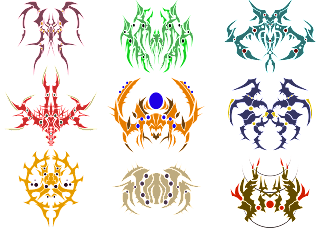 I've also started working on an official collaboration with TyvridKizuna, an artist that's done some work for the studio in the past. His latest Chibi Project involves some concept art and I designed the emblems for the individual pieces. Check out the installments of the project over on his DA page.
Finally, we were able to secure passes to PAX Prime in Seattle, Washington again. Taking place at the end of August, we'll be attending the event. I'm working on some things to take and give out like last year and I'll post some more on that when it gets closer.
That's it for now. I do have some other papier mache things in the works in addition to the final writeup on the mask.
Thanks for stopping by!
~Zan
Email ThisBlogThis!Share to TwitterShare to FacebookShare to Pinterest
Newer Posts Older Posts Home
Subscribe to: Posts (Atom)