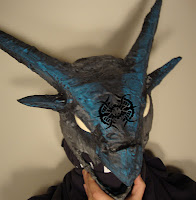 It's my favorite holiday and time to present this year's papier mache costume. Building upon the Faceless Summoner lore, here is Chaos Omen Yzrinn! As an intro to the piece, here's the final piece of lore.

After days of violent fights between the various champions, one emerged and stood atop the bodies. A young warrior named Yzrinn of the Illithid clan that called themselves the Nightmare Veil was crowned the winner of the contest. Possessing rare genius knowledge of reality-distorting spells, he managed to stop or completely subdue all challengers, leaving all in twisted agony.

Upon completion of the Merciless Tournament, the sages ordered all the bodies of the defeated to be transported to their arcane forge. There, they used alchemy and an ancient soul-sealing technique to transmute the corpses into an artifact. The artifact, a twin-bladed glaive set with yellow stones was born and infused with the rage of those killed in combat. Named “Sanity’s Requiem” by the sages, the weapon was tailored towards Yzrinn’s mind-destroying abilities and presented to the victorious warrior along with the title of “Chaos Omen”.

The victory ceremony complete, the sages set Yzrinn before the rift and used their incantations to open it.

“Go unto the plane of the mortals as the Omen of Chaos,” they declared, sending the traveler through the swirling void.

What awaits the warrior from the Sealed Dimension? Will he emerge in the mortal realm and finally open the gates to the forbidden ones? Only time will tell.

Youtube highlight video:
This year I wanted to try and make a Mind Flayer/Illithid type of mask. While I've never been much of a D & D player or Lovecraft reader, I find some of the creatures of the respected mythos to be fascinating in design. As a result, I wrote Yzrinn's story and designed based on those design elements. For his weapon, I thought designing a glaive would be an interesting change of pace. Taking some inspiration from the Insect Glaive from Monster Hunter, I designed Sanity's Requiem to be a sharp and spiny weapon with an organic look.
That should do it for this year's Halloween project. I've been working on some other masks for the Summoner and am planning how I want to post them. I definitely want to focus on more mache content as we get ready to go into 2021.
Thanks for visiting!
~Zan
Email ThisBlogThis!Share to TwitterShare to FacebookShare to Pinterest

Halloween is one day away! As an introduction to this year's project, here's some lore:

While the mortal plane began the fight against encroaching destruction, the denizens of the Sealed Dimension faced their own challenges. The constant fighting between the demon factions continued to ravage the various continents. Over time, a small unified group of arcane sages that had been born in the Sealed Dimension began to watch a rift that had appeared far to the north. It looked like a previous point of entry to the mortal plan was sealed with a runic barrier as was the case whenever something was banished. This particular seal had started to weaken over time, resulting in the rift.

Seeing the rift as an opportunity, the sages were able to peer through the tiny opening and gain insight into the conflicts plaguing the mortal plane. They saw the increasing power of the demons along with the looming return of the god-creature, Trinitus.  The sages formed a plan. If they could combine their strength, it would be possible to widen the rift briefly and allow something through before it closed again. Perhaps someone from the Sealed Dimension could cross over and find a way to free them.

For weeks, the sages contemplated their strategy. Would they create a homunculus infused with arcane power? Perhaps a catalyst sealed with a summoned spirit could manifest itself beyond the rift? Ultimately, the sages decided that it should be a warrior from the Sealed Dimension that would make the journey.

In order to determine the strongest warrior, the sages gathered thirty skilled individuals from the various territories. Fighters, mages, assassins, and more were brought to a great arena within the arcane territories. They were set against one another in fights to the death in what has been known as the Merciless Tournament. The winner of the bloody contest would be selected to enter the rift and journey to the mortal plane.

<>
Tomorrow's post will have some additional lore along with links to the project itself.
Stay tuned!
~Zan