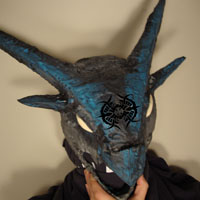 It's Halloween once again and like years past, I have prepared another papier mache project. This one is a new entry in the tale of the Faceless Summoner and continues the travels of Ardelrius with some more lore:

The Faceless Summoner and I continued our travels across the realm to the far northern continent. We made a few stops along the way but something seemed to call my odd traveler friend onward. There were very little conversations and I could do nothing but follow, resigning myself to the journey as some sort of observer.

We arrived at the fringe territory of Taeruth outside the borders of some towns just shy of the northern tundras. Our target was apparently another temple built into the face of a sloping cliff side. We managed the treacherous path easily enough and the two of us found ourselves standing at the mouth of the temple. It was crafted from pure obsidian and extended into the mountain. Upon entering the seemingly vacant temple, Ardelrius made its way to a central altar at the heart of the structure. The spire-like piece was constructed out of bone and bore runic seals around its base on the floor of the temple.

“This seal binds the gate of the Void so that none shall escape.”

Those were the words written in an ancient tongue and scrawled around the seal. Invoking energies from the Tree of Souls once again, Ardelrius conjured an otherworldly force and the altar began to resonate with the same arcane light.

“Those that stand before the gate must pass the challenges of its guardians,” a hollow voice growled from the shadows.

“The Umbral Crested bird and the sorceress of the Scattered Tides protect this place.”

Two glittering jewels appeared at the base of the altar. One gold and one deep blue, they shined with magical power, seemingly waiting for our next move.

“What are we doing here?” I asked the Faceless Summoner.

“To combat the threat to this world, we must dive into the banished void in search of power,” my companion answered. “Defeating these guardians will grant us passage.

With that, Ardelrius knelt and reached towards the jewels. I knew a fight was approaching. This was the way things always happened and I knew my friend’s power would be tested once again.

The two masks represent the guardians, Umbral Crest Valdamos and Scattered Tide Mierkharesha. A summary video of the entire process along with the final results is up on Youtube:

This year's project was an interesting return to form. I'd like to continue the Summoner's story and will be thinking about the next steps for future entries. There should be some new mache things coming in the next couple months.