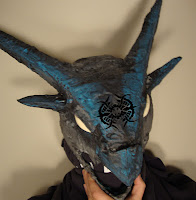 I hope everyone's summer is going well. This is a bit after the fact but our first live stream over on my Twitch Channel was a success! We had a handful of people come through and hang out, either from DA or from Youtube. I ended up streaming for about 4 hours and did some emblem designs while we listened to music. It was a great experience and I'd love to do it again. Right now the easiest times for me to stream are on the weekends with Saturday being the most flexible. I'm not ready to commit to a weekly stream but I'll be doing another one very soon. Announcements will go up on Youtube and Twitter when we go live. I'll try and give a few days notice on Deviant Art and Twitter just so people don't get caught off guard. I've been considering doing some streaming of games too but that's going to be lower priority compared to the art streams.

For updates on my projects, we just wrapped up a mini-event on DA and Youtube last week as we counted down to the release of Monster Hunter Generations. The designs were pretty well received and I want to thank everyone that checked them out each day. The monthly MH circulars and weekly Brave Frontier emblems will continue as normal. I'm still working on a few different papier mache projects and updates will be coming on those later.

Finally, another update is the addition of a new artist to Drakenwrath's creative team. TyvridKizuna who has helped on a couple projects so far is officially joining the studio as a regular contributor. Rather than act like an outside collaborator, he will be able to directly work on projects and put things up on the site and Redbubble store. He will be preparing an introductory post shortly after this goes up.

I think that's everything for now. Keep an eye out for updates regarding Twitch streaming and other news!