Here's the third entry in our Halloween countdown event:


This is the demon, Grahl. Here's the lore article for this piece as well.


We live in an era of war and bloodshed. Humans are just another frail, inferior species here to be the food and slaves for us demons. Our pack, the Fanged Conquerors are legendary in these northern territories. We’ve ruled the peons that live here with brutality for years and it’s all thanks to the leadership of our commander, Grahl. Demons are born into this realm every day but none possess the battle prowess and iron will of the commander. When the armored humans of Valengard tried to drive us out, he slaughtered three flanks of their lancers by himself! When the dragons of the skypeak burned our fields, he led the extermination force that drove them off the mountain! Lord Grahl is a ruthless but fair leader of our pack. He acknowledges and rewards those with power. Someday I hope to serve in his detachment.


Last week a strange traveler appeared on the borders of our territory. It looked human in shape but had no familiar human features. The garb of this visitor was nothing more than a black robe and its face looked like a human’s with all the notable bits burned off. I was there when the strange traveler walked through the outer gates. Where were our guards? Did they just let it pass with no questions? After walking through the rows of huts, the traveler stood before Lord Grahl’s keep and calmly waited.


One of the other advanced guard roused our leader and he appeared at the keep’s entrance to greet the stranger. Lord Grahl must have shown interest in the peculiar staff the traveler carried because I saw him gesture at it from where I was watching. I think that stranger issued a challenge to commander Grahl because the two promptly left the central grounds of our territory and vanished into the nearby wastelands. It’s been three days since they left. Where did our leader go?
<>


I decided to go for a different theme when I started working on Grahl. Compared to the more insect-like shape of Tirradol before, I knew this one was going to be a sort of demon. The shape of the face evolved over time and I went with flat plating behind the head to make it look like armor. The color scheme itself started off more purple but slowly blended darker as I mixed in more shades. Just like the last mask, the raised textured "lines" you see on the head are hot glue sticks. I think this is the last time I used those on the masks but I'm definitely happy with how they enhance the skin texture. Finally, I added lighter blue and red highlights for contrast. Grahl's teeth are Fimo clay but they don't glow in the dark like some of the others. Once again, a rare earth magnet in the top and bottom of the inside of the mask help secure it the main face. 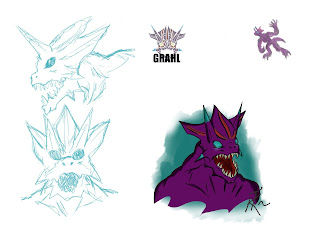 Finally, here's the concept art piece for Grahl. I do like that the overall purple color scheme is preserved here complete with the lighter highlights. I thought long and hard about how Grahl's physical build would look. Being a demon commander, it makes sense to draw him with a heavy frame and I think that's communicated clearly here. My mental picture would also have war armor fit for a commanding leader too. I wouldn't getting some full drawings of these pieces done at some point.

Stay tuned for the next entry!