This is the Gluttonous Ogre, Voracion. Just like the all the others, here is Voracion's lore.

It’s been two weeks since I left the coastal temple. I continued to follow Ardelrius north along the coast. The robed traveler passed through the ruins of a destroyed city called Heisath. From the way it navigated the battered streets, it seemed Ardelrius had been here before. After an hour of crossing the central square of the ruins, Ardelrius stopped at an open clearing. Burned into the ground near some rubble was a large singed black outline. I watched the creature stop and stare at the marking for what seemed like an eternity. Finally, it made a gesture with its staff and then continued on.


We left the Heisath and took a turn west toward the forestlands. This was the territory of the ogres, great beasts of a separate species from the demons we knew. They had constructed numerous crude dwellings within the forest and Ardelrius headed straight into the most prominent settlement. Fortunately, the dense clustering of trees made it easy to keep myself hidden while I followed. I kept my eyes out for the ogres as well. I’ve heard they can smell humans from a considerable distance.


The mysterious stranger had only gone a short distance into the ogre settlement when he was surrounded and accosted by a squad of the brutish beasts. They led the intruder into their town square and waited. While the wanderer stood with the ogres pointing their spears on all sides, a large form appeared before them atop the platform in the village square. It was the leader of this ogre village, a massive creature named Voracion. I’ve heard ogres are stupid and barely capable of forming sentences but Voracion seemed different. He didn’t look at all surprised to see the stranger and also didn’t appear to be threatened by its presence. After gloating about his recent razing of Heisath and the apparently invincible nature of his army, Voracion demanded that the stranger hand over his walking staff. There was an awkward moment of silence, the robed wandering making no sort of response.  When one of the guards walked up to take the staff, Ardelrius turned, made a single gesture, and turned the ogre to dust, armor and all. This seemed to spark a reaction in the ogre leader and he descended from the platform to face Ardelrius.


The fight between the two was brutal but quick. Voracion was a savage fighter and he fought with the ruthlessness and cunning expected of a leader. He was unable to defeat his foe and it seemed clear the fight itself was little challenge to Ardelrius. After dodging many crushing blows from the enemy, the wanderer raised his tree-staff and summoned what looked to be blades of stone from the ground! They struck up in a line in all directions, cutting Voracion through his armor and dropping him to his knees. The injured commander bellowed for his troops to aid him but they didn’t come forward. All of the armed beasts shrank away from Ardelrius’ gaze. While his fallen foe spat curses at his betrayal and his enemy, the traveler walked forth and held his staff out. A blinding yellow light consumed the area and when it had faded, the massive ogre leader was gone. The destroyed pieces of his armor sat on the ground but the beast himself was nowhere to be seen. It was at this point the other troops broke rank and took off into the forest in a panic. Ardelrius made a slight bow towards the pile of armor and then set off through the village and back into the forest. It seems the tree-like staff is some sort of artifact that’s linked to the disappearance of those defeated by Ardelrius. I feel like I’m closer to discovering the truth…
<>

This mask was interesting to make. I did the construction of each in waves and Voracion was part of the second wave I made. Going into the initial design process, I knew I wanted a demonic looking creature with a huge mouth and lots of teeth. What began as an almost feline look on paper slowly evolved over time to get the more ogre-like shape in the final piece. From the front, Voracion looks almost like a gremlin which I suppose is fitting. I wanted to make sure to add the sharp spiky protrusions around his face while not making them whisker-shaped. After I had glued the glow in the dark teeth in, I had an idea. Several of the previous masks have glowing teeth but Voracion has those two crystal things above his eyes. Those glow as well and you can actually a creepy grinning face when the lights go out. That just might be one of my favorites design elements of all the masks so far. I'll revisit that idea again later.

For Voracion's color palette, I wanted to make something lighter that would set itself apart from the darker color schemes so far. Grahl, K'taerthos, and Calderyn all had darker shades in their color scheme so I initially went bright yellow with Voracion. I blended in some darker colors and made the shading darken more around his face and eyes. After adding the blackwash, this made the colors stand out a bit and I'm pleased with the effect. It still creates a neat contrast with the teeth and brow crystals. I also experimented a bit more with the coverage and placement of anchor magnets for this one. Note the head covers more of the top of Ardelrius and the chin has a plate that extends back. This allowed me to make sure the anchor magnets on the face had plenty of room to align with the ones set on Ardelrius. The end result is a snug fit and this mask stays in place pretty well. 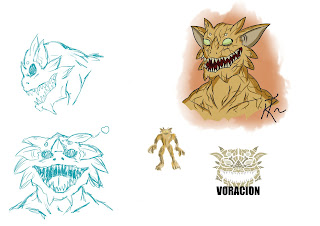 Here's the concept art. I feel like some of the more feline sub-elements come out here. It's probably the ears and big grin on the rendered image that do it. I wanted to make sure to have Voracion drawn with a larger build like the other monsters. He's also a commander like Grahl so I felt this should be prominent in the drawing. If nothing else, there should be some hints at his gluttonous nature. The bottom left sketch is a bit more comical than the others so far. Perhaps the ogre is looking at some food...

That's it for this one. Tomorrow we will be back with another piece that's going to be a bit more of a departure design-wise from the ones posted so far.