Here's the fourth installment in the daily countdown to Halloween:

This is Abyssal Horror K'taerthos. As usual, I've written up the lore for this mask. It's a bit more of a read this time.


It’s been one month since I left our village. I traveled north since that was the logical path of the mysterious traveler. The route would take me toward the demon territories but that didn’t matter. I had to learn the truth. After the incident with Tirradol, the mysterious of the visitor plagued my mind. When one of our trade caravans mentioned seeing the black-robed figure on the northern path, I knew it was my chance. I had to find the traveler and learn the truth. If nothing else, I had to thank the wanderer for saving our village and driving away the monster. Our crops returned in full so I can only assume the visitor killed or forced Tirradol to flee.


I was able to cross the demon territories in two days. The massive gates of Draesadir lead into the largest of their territories, a place ruled by a greater demon named Grahl. I thought I’d have to sneak through the city to pass but upon my arrival, there was nothing. The houses and huts looked abandoned and there was not a single demon to be found. The entire city was a tomb and looked to have been deserted quite some time. Either way, I was thankfully able to move on and secured some provisions along the way.


A large temple was built along the coastline to the north. The stone monument was set into the cliff sides above the waves. As I followed the path towards the water I saw the shape of mysterious traveler! Either it had taken some time to rest or my haste had allowed me to catch up quickly. Ardelrius looked to be making for the temple so I followed after, keeping a safe distance in case danger was close by.


It was nightfall by the time Ardelrius reached the entrance to the temple. A single stone pathway cut into the cliff was the only way to get to the temple’s opening. I’m no mountain climber and the path down was dangerous. Still maintaining my distance, I followed the traveler into the temple.


The ones that built this temple must have been part of some sort of cult. All across the walls were verses of some text in arcane prayers. I could read them since they looked to be written in our language. Anyway, I watched Ardelrius reach the center of the temple. A flat stone sacrificial alter was adorned with carved statues and more of the text. The traveler produced an object and dropped it onto the altar. At first I couldn’t tell what it was. It looked like a large piece of meat from an animal. Looking closer, I could see that it was severed arm of a demon! I recognized the claws and scarred purple hide.


Seconds after the blood began to soak into the altar, I saw the great torches lining the chamber burst into blue flame. The same light began to illuminate these arcane rune symbols painted on the walls. From the far wall behind the altar, the stone began to warp and distort. A black portal appeared, resonating with the symbols as Ardelrius stood, unmoving. What appeared from the portal I wish I could unsee, reader.
I’ve heard tales of the ancient horrors. In past times when creatures greater than the demons roamed our realm, it’s said that the most fearsome were subdued and sealed away to prevent widespread calamity. They tell these stories to children but what I have witnessed is no fairy tale. A beast from the darkest shadow appeared in the temple that day. It had two glowing eyes, numerous crystalline fixtures on its head and a circular mouth with rows of teeth. Countless tentacle appendages pulled it through the portal and it faced Ardelrius who was dwarfed by its mass. I really contemplated fleeing then as just gazing upon the monster made me feel like I was looking at the physical manifestation of insanity. I’m still not sure what happened. A fierce battle was waged in that temple and when it was over, the abyssal horror was gone. Once again, the traveler was victorious. As Ardelrius departed the temple, I was faced with the choice to follow or turn back. Part of me wished the return to the safety of our village but another part was still desperate to know the truth. What was the goal of this mysterious being? It may cost me my life but I must know the truth…


I followed the same set of processes for creating K'taerthos as I did for the last two entries. One major difference for this one is the overall coverage of the mask. You can see in the side shot how the top and fin-like parts go back over the Ardelrius main mask as opposed to just the face area. That combined with the pointed protrusions on the face itself make K'taerthos one of the heavies of the masks in the series. The curved teeth are all made of the glow in the dark Fimo and they light up great in the dark. You see nothing but an eerie circular maw of teeth.

For the color scheme I wanted to go with a darker somewhat aquatic scheme that still had some contrasting elements. The green stones set in the face turned out to be perfect for this and they almost seem to glow strong light. 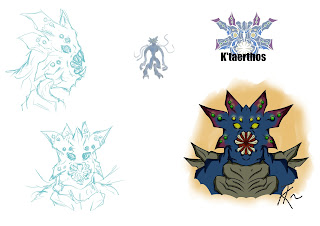 Lastly, here's the concept art. I really had to think about how I envisioned the rest of K'taerthos' body. I knew it had to be bulky and armored and I do think the addition of many tentacles would be fitting for a creature of the abyss. Some might draw some parallels to the C'thulu mythos and I did keep some of those design elements in mind when designing the character. I haven't read much of the literature but I do like the thematic aspects of C'thulu. The idea of otherworldly creatures tied to themes of chaos and insanity definitely fit with K'taerthos' lore.