Here is the last entry in the Halloween countdown.


This is the Nightmare Stalker Jhagan. As is the tradition for each entry, here's his lore.

I finally worked up the courage to confront Ardelrius. After descending the skypeak where the Naetherspawn city was built, the traveler continued south. It was on this path where I revealed myself and sought an audience with Ardelrius. I explained that I was from the village plagued by Tirradol. Of course the featureless face of the robed traveler was unreadable. I went on to tell Ardelrius that I had been following on the numerous stops we had made and had witnessed the defeat of all those creatures up to this point.


Ardelrius listened to my tale and then spoke to me. It talked in that hollow rasp of a voice making its gender impossible to read. The faceless summoner told me that my life would be in great danger if I continued to follow on its journey. I begged the traveler to let me continue the journey as a way to help repay the debt for saving our village. Ardelrius made no discernible response and then turned back to the path.


With our introduction out of the way, the two of us followed the Artann Road south. At day’s end we made camp near the outskirts of a large human settlement. A large outcropping of rocks served as a good hiding spot while I built a small fire. I was curious to see if my mysterious traveling companion slept or ate.


Both of us sat watching the fire in silence as night covered everything in darkness. Ardelrius stood and walked over to a large clearing in front of the rock outcropping. Using the end of the tree-like staff, the robed creature began drawing an intricate runic mark in the dirt, eventually etching a circular symbol. I asked about the drawing but was met with only silence. When it came time to sleep, I unrolled my bedding near the fire while Ardelrius sat in the center of the rune. It wasn’t long before I drifted into unconsciousness.


I have to say that my sleep has been uneasy since I started this journey. There was a constant fear of danger that kept me from sleeping more than a couple hours at a time. This night I slept soundly and dreamt for the first time in weeks.


In my dream, I followed Ardelrius along a flattened path through a field of blood-red grass. The sky was an unusual purple above and everything seemed to pulse with an otherworldly aura. We stopped at the edge of the path and the summoner stared up at the sky in front of us. Before I could ask what we were doing, the same circular rune suddenly appeared high above, transfixing in the sky. A black shadow seeped out from the seal, dripping down like viscous oil. It coalesced into solid from and took shape before us.


I was immediately reminded of the fear I felt in the Abyssal Temple. The creature that faced us now was a nightmarish beast that towered above. Two beady eyes on one side of the face were a sharp contrast with the single large dark eye on the opposite side and that eye was lined with a purple scar. The beast had a mouth that split the right side of the face and was brimming with sharp fangs. After taking note of its surroundings the creature introduced itself as “Jhagan”. I shrank away from the monster’s visage while Ardelrius prepared to fight.


Once again the battle did not last long. Ardelrius dodged the strikes of his enemy with minimal effort. This time, my traveling companion summoned raging firestorms not unlike the breath of the dragons. The licking flames kept Jhagan’s movement pinned down. Despite its apparent ability to phase out of its surroundings and hide itself, eventually Ardelrius cornered Jhagan and struck a finishing blow with the tree-staff. Like the others, the demonic creature was consumed by light and then absorbed into the artifact.


I awoke the next morning to see the sun shining. The events of last night’s dream were hazy but remained in my mind. Ardelrius was still sitting in the runic circle, those unblinking eyes staring off into nothing. The traveler wasted no time and rose, stating it was time to move on. I hastily packed my things, the vivid dream still haunting me. Did the summoner claim another defeated foe? Did that battle actually happen? We started off on the path again and I made no attempt to question my companion. If I continue to follow this faceless summoner, would it eventually come for my soul? What was the point of all these battles? What was that impending catastrophe this creature was preparing for? I feel like I have more questions than ever but I must continue this journey and find the truth.
<>


As the last of the designs in the series, I think Jhagan might be one of my favorites. I went for something dramatically different here focusing on asymmetry for a more chaotic look. This was one of the only designs that I didn't sketch out before making. I knew I wanted a creature with a large mouth full of teeth so that's the first design element I built from. This is also the only mask to have glass taxidermy eyes. I decided to add those, sacrificing visibility on that side of the face. When wearing the mask, that doesn't impair vision too much but it is harder to see. The lighter glass stones were arranged randomly on the face to add to the chaotic look. The forehead crystal and teeth glow in the dark as well.

For Jhagan's color, I was trying to make sure the palette didn't look to close to any of the other pieces in the series so far. This resulted in me doing something I've never done with a mache piece. Since I was painting Jhagan at the same time as Caeliphera and Thalgre, I had containers of their colors with leftover paint. For Jhagan, I mixed all of the shades together in a couple of batches and then applied the tones over the whole mask. The lighter purple highlighting was done at the end. At the end, the final result was a somewhat blended palette that still looked distinct. I think this is pretty symbolic since Jhagan was sort of the culmination of all the techniques I used on the masks up to this point. 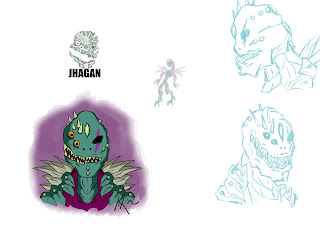 Here's the final piece of concept art. I think it does a good job showing the main design elements of Jhagan. The painted primary is an interesting take on what the entire monster itself would look like. I hadn't even thought that far ahead so it works for me. I like the lower right sketch. I think that pose actually looks more fearsome than the final colored piece.

That's it for the masks in this wave of the Faceless Summoner series. I started this project with the intention of making it ongoing and I'll be doing another wave of faces for Ardelrius in the future. It may or may not be a sequential event like I did for Halloween but I feel like both the concept and the lore behind it are worth expanding upon in the future.

I'll be making another post tomorrow to wrap up the countdown. It's been interesting putting out this much content consecutively but I think it was a good experience. I'll also talk a bit more about the design content that's going up in November.