Here's the second to last entry in the countdown.


This is the Skyborne Hellion, Thalgre. As usual, here's the lore article.

After crossing the forestlands past the territory of the ogres, I followed Ardelrius west in the direction of the coast. The traveler took a turn south, heading up toward the Kuradel Steppes, a series of mountains that reach above the lower cloud layer. It seems the wandering traveler’s current target is the pathway through the skypeak which will lead back towards the cities farther south.


A single winding mountain path cut through the skypeaks, a perilous journey for any person.  Still keeping my distance, I kept on Ardelrius' trail. Fortunately, our passage through the ogre settlement had yielded more provisions and I was able to keep going while keeping out of the traveler’s sight. At last, we came to the gates of a great city built into the sides of the mountain.


Pure azure stone gates barred entrance to what appeared to be a demon city. Two massive guards descended, stopping Ardelrius. They had plated scaled blue skin, sharp claws, horns, and large feathered wings. Remembering back to the tales told to me when I was young, these must be Naetherspawn! Fragmented documents from the lore tomes speak of monstrous creatures that were born on another plane like the Ones of the Abyss and found their way to our realm through a rift. These creatures are similar to the demons but appear to be much more intelligent. As far as I know, the Naetherspawn live secluded lives in their cities far outside normal reach of humans. They prefer to keep to themselves apparently.


I watched Ardelrius speak to the guards before they opened the gates. Emerging from within was a large Naetherspawn warrior. He looked to be a commanding officer of their armed forces as he was clad in plated armor and brandishing a curved blade. I heard the great beast introduce himself as Thalgre of the Skyborne and it appeared he knew Ardelrius. The robed traveler spoke of an approaching calamity and referenced several names I hadn’t heard before. It sounded like he was asking this Thalgre for his aid. In response to this information, Thalgre issued a challenge to the wanderer. If Ardelrius could best him in combat in their arena, he would agree to offer his help. Of course the traveler agreed and followed the creatures into their city. I climbed around the rocky cliffs near the city walls to get a better look. Fortunately, there was a rough path that helped me get to the top in between two of the sentry towers.


This combat arena happened to be a couple blocks from my position atop the wall. I could see down into the paved square clearing that was bordered by sloping stone benches. It was here Ardelrius and the Naetherspawn warrior fought. The fight didn’t last long and eventually the robed traveler emerged victorious. Thalgre was left kneeling before Ardelrius, his body wounded from the various attacks.


Like the others before, I expected the blue monster to curse his enemy and deny his loss. Instead, the massive winged creature rose and acknowledged his defeat to Ardelrius. After agreeing to lend the summoner his aid, Thalgre stood while a bright white shined forth from the tree-like staff. When the light faded, all that remained was a stone statue of Thalgre, a perfect preservation of his image. Apparently this is what happens when these Naetherspawn lose their souls. Having claimed another, Ardelrius prepared to depart the city in the sky.
<>


Thalgre started off as a very different design. The original foil shell I used a base was smaller than the rest and I wasn't sure what kind of creature I was going to design. Eventually I settled on a shape that was similar to Grahl but had some more defining features. The large curved horns were original going to point outwards but I angled them back to make the design different from Grahl. I also used the glass stones on Thalgre's forehead, choosing colors that would compliment the red horns.

For Thalgre's color palette, I had the idea of a sky demon in mind and knew the overall scheme was going to be lighter. Since K'taerthos was the only blue monster so far, I decided to go lighter for Thalgre and used a mix of light blue and turquoise for his skin. The bright green patterning around his mouth was blended for contrast and I think it adds variation without looking too much like lipstick. 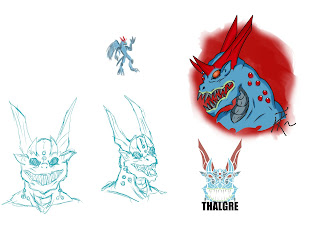 Lastly, here's the concept art for Thalgre. I do like in the rendered image how the teeth are angled outwards and numerous just like the original piece. The color scheme translates well here and I like the contrasting horns and gems. It should be noted that based on the lore, Thalgre isn't supposed to be an evil creature. I feel like this is hard to get a cross given his species and I'm glad the sketch in the bottom left wasn't used. The huge mouth of teeth does a good job in capturing that design element but it would've ended up looking too sinister I think.

That's it for this entry. There's one more mask to post tomorrow and then we'll start wrapping up before Halloween.