Next entry, let's go. This one is interesting.

This is the first insect-type mask, Caeliphera. Her lore is included below.


Rites of the Blight Empress: Sacrifice


These rites are transcribed for any that take up the cause of our glorious cult in the future should our numbers dwindle. We are the Envenomed and we pledge our undying servitude to the great Blight Empress, Caeliphera. Ever since she first descended to our mortal plane, our followers have carried out her will and done everything in our power to further spread her influence. The Grand Temple of Sacrifice lies in the west, past the forestlands inhabited by the ogres and near the coast. It is here and the surrounding settlements where most of us gather. We meet on the final night of the month to honor our great empress and hear her wishes. When she calls for it, we bring a sacrifice as well.


If you are a new acolyte to the ranks of the Envenomed, perhaps you are unfamiliar with the form of the empress. Far exceeding the capabilities of a mere human, our leader is of the Plague Eater tribe, a small race of sentient insect demons. Her kind is said to reside on another plane altogether and I don’t believe any others have been observed on our world. Empress Caeliphera’s regal form is a site to behold, fitting of her commanding presence. Those that have seen her in a rare instance of combat know that her rending claws and corrosive venom are capable of subduing even the mighty dragons. It’s said that even the Sealed Ones of the Abyss cannot withstand her strikes.


On to the subject of sacrifices. On the night where we honor the Blight Empress, it’s critical for only the most powerful of subjects to be brought forth. Our leader demands great sacrifice and we, her loyal followers would earn her wrath if we presented an inferior specimen. No, the strongest of humans, demons, or even ogres must be selected. When we cast our sacrifice into the Jade Portal, there can be no question that they are worthy for our empress.
Last week, a strange traveler arrived at our temple grounds. It was a black-robed figure with a featureless face. I suppose it was a human, perhaps one cursed by one of the other deities of this world. Anyway, the traveler asked to see the inner sanctum of our sacrificial temple with the intention of becoming empress Caeliphera’s newest sacrifice. Such a thing has never been asked of us but our leaders took considerable interest in the walking staff of that traveler. They agreed that the artifact itself would be of value to our leader and so they led the traveler to the Jade Portal. The leaders must have been excited to present this impromptu sacrifice for they didn’t even begin the greeting rites and simply cast the traveler into the portal. Since then, we have not heard any new orders from the Blight Empress. The last night of the month draws near so we will gather once again to hear her wishes.  Perhaps she will shower us with a greater blessing than normal for providing an extra sacrifice…

I went into this particular design with a theme in mind. The original concept sketches I made were of a bug-like creature and I went with the poison theme since it seemed to fit. This mask has a different shape than the others as a result. The mouth section consists of those pointed mandible-like extensions which is a bit of a departure from the other more straight-forward designs. I added the long antennae on top to complete the insect-like look. This mask is also unique since it has actual eyes. The open spots in the middle are actually supposed to be breathing vents. I felt that the piece needed visible eyes to really sell the design. Caeliphera is probably most inspired by praying mantis insects.

For the color scheme, I had to be careful not to make the colors too similar to Tirradol. I knew the green primary color was going to be perfect for reflecting the venomous color scheme and I blended the shades with lighter greens and yellows to keep it from getting too dark. The mouth parts turned out pretty well with the darker purple shades and they stand out well. The off-white stones set in the forehead and chin help with the contrast. 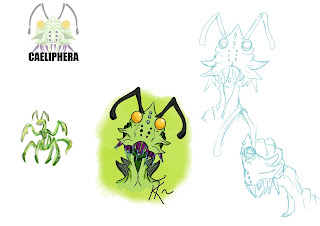 The concept art for Caeliphera is pretty straight-forward. Her design translates pretty easily into drawn form. The painted primary sketch of her body was the artist's interpretation. I think it's fitting. Caeliphera's whole lore setup is that she's some sort of greater insect demon and she would need to have a commanding presence.

That's it for this piece. We've got two more entries left in the countdown.