Here's the fifth entry in the countdown:

This is the fiery dragon, Calderyn. The accompanying lore writeup is pasted in below.


This world is full of monsters, demons, beings of the ethereal and plenty of other creatures besides humans. Included of course are the dragons. Regal, illusive, and worthy of their reputation, the dragons have long since been cemented in the lore of the realm. While mostly keeping to themselves and having little to do with what they consider “lesser species”, enough interaction with the dragons has been recorded to document their legacy.


Many dragons make their home in areas that reflect their elemental affinity. Fire dragons prefer volcanic regions, water dragons live in the oceans, sky dragons roost in the high mountains and so on. As a result, it’s not common to see a dragon yourself unless you do something to anger it. This is especially true in the tale of the Cinder Drake. In times where a dragon enters a pact with another being, it’s not uncommon for them to become guardians or protectors. The powerful female fire dragon, Calderyn is one such case. Documented accounts of the western Heisath kingdom tell of a heroic knight that found the fallen body of the great fire dragon near the base of the Torun mountains. Dragons frequently make their home on the skypeak and this one looked like it had been attacked for it was near death. The knight who was never named in the scrolls apparently tended to the wounds of the dragon and helped it recover. After she had regained her strength, the dragon named Calderyn told the knight that her kind had been forced from the mountains after being attacked by a pack of demons. They had apparently been fighting with the northern territory packs and in retaliation they struck the dragons where they had been living. Calderyn survived the fall from the skypeak but would have died had the knight not helped her recover. To show her thanks, the beast offered to become a guardian of Heisath. The kingdom itself was frequently the target of raids from nearby demons and lawless humans.


The scrolls also tell of a great battle that burned Heisath to the ground. Following a tremendous quake that decimated the city, a detachment of ogres from the west laid siege to the battered kingdom. Many of the knights had been out helping secure territory across the continent and thus Heisath was not prepared to fend off the ogres after the quake. They leveled the buildings, slaughtered hundreds and left the once prosperous city in smoldering ruins. Calderyn herself fought bravely to the end but could not drive the hordes of ogres back. The final scroll recovered from Heisath tells of her last moments once the armies had moved on. As she lay dying once again near the city gates, a form appeared before her. Witness accounts describe a featureless creature shaped like a human clothed in a black robe and wielding a tree-like staff. There are no further records of what this figure did but it’s rumored that it absorbed the soul of the dying dragon, for no trace of the great beast was ever found. A single scorched outline was found etched into the ground at Heisath but nothing more.
<>


For this mask, I knew I wanted to go back to doing a dragon-like design. Those that followed the last mask I did might recognize the plated mandible extensions on Calderyn's face. That's because she's the same species of dragon as Ignir from the Trinitus mask. I do want to create some connected themes as I'm building this world these creatures inhabit.

When I was doing the design elements for Calderyn, I wanted to have a the horns but their layout and shaped changed a few times during the constructions process. I think the long curved horns worked out fine though it does make this mask much wider than the others. This mask needs to sit on a certain branch of the tree so it doesn't cause problems with the rest. Finally, the color scheme is pretty straight forward. I went with darker reds for the fire color scheme but also mixed in the yellow highlights and darker purple horns for contrast. 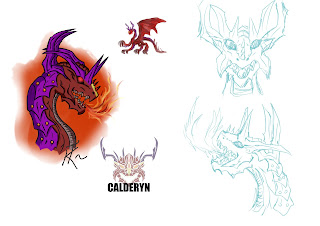 Here's the concept work for Calderyn. This one turned out to be interesting. I told our artist that I didn't have any specific things in mind for Calderyn's body. I just laid out the facts that she's a fire element dragon and let the artist interpret the rest. The end result is what you see here. I'm happy with the fully rendered design and the painted "primary" sketch near the top is definitely in line with what I would envision for this type of creature.

That's it for this entry. See you next time!